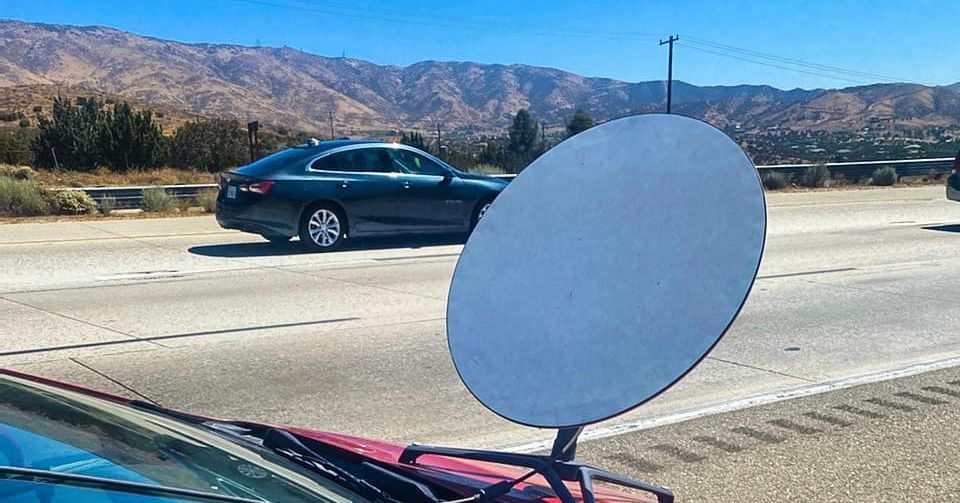 A California Highway Patrol officer stopped a Toyota Prius on Friday that had what looks like a Starlink dish fastened to its hood, the agency said in a Facebook post. The “visual obstruction,” sitting right smack in the middle of the car’s hood, landed the driver a ticket.

“Sir I stopped you today for that visual obstruction on your hood. Does it not block your view while driving?” an officer said, quoted in a post on CHP Antelope Valley’s Facebook page. The driver replied: “Only when I make right turns…”

The driver told the CHP officer that they were using the antenna to have Wi-Fi for a business they run out of their car, the agency told CNBC, which first reported on the traffic stop.

“Yes, it is in fact illegal to mount a satellite dish to the hood of your vehicle,” CHP’s Facebook post continued, citing a state law that bars other view-obstructions like objects hanging from a rear-view mirror, or poorly positioned GPS mounts. “It’s about safety folks. These are the real stories of the Highway Patrol. Safe travels everyone.”

Elon Musk: “Technically, you could buy one and just stick it on the car.”

Starlink, SpaceX’s fast-growing broadband internet service, is in the midst of an open beta period with over 70,000 users across 12 countries, according to its CEO Elon Musk. Many individual users are paying $99 per month for internet under that beta, using a $499 bundle of a self-aligning, large pizza-sized Starlink dish and Wi-Fi router.

SpaceX doesn’t have FCC approval to mount consumer Starlink terminals on moving vehicles yet, but the company has been testing such capabilities for months — mainly for commercial use-cases like shipping vessels, large trucks and passenger airplanes. Musk has said Starlink antennas, as currently designed, would be too powerful for individual cars.

“The antenna for that high-bandwidth, low-latency thing is sort of about the size of medium pizza, which you could put on a car, but I think is more bandwidth than you would really need,” Musk said during a January 2020 earnings call. “Technically, you could buy one and just stick it on the car.”

Not connecting Tesla cars to Starlink, as our terminal is much too big. This is for aircraft, ships, large trucks & RVs.