Google used anticompetitive practices in an attempt to “preemptively quash” Samsung’s Galaxy Store, and prevent it from becoming a viable competitor to its own Play Store. That’s according to an antitrust lawsuit filed by a coalition of three dozen state attorney general, which accuses Google of illegally attempting to control app distribution on Android. The suit also alleges Google paid off app developers to stop them circumventing its store.

The allegations challenge one of Google’s core defenses of its policies, which is that unlike Apple’s iOS rules, Android allows both competing app stores and side-loading apps directly. The lawsuit is effectively claiming that this openness is a facade, because while customers technically have the choice of where to get their apps from, Google’s business practices have prevented a viable app store competitor from emerging.

“Google felt deeply threatened when Samsung began to revamp its own app store, the Samsung Galaxy Store,” the suit says, and describes Google’s approach to the competing store as “a threat it needed to preemptively quash.”

The suit outlines a range of tactics Google allegedly used to prevent Samsung’s store from becoming a viable competitor. It claims Google used revenue share agreements with Android phone manufacturers that “outright prohibited” pre-installing some other app stores, and that it made “a direct attempt to pay Samsung to abandon relationships with top developers and scale back competition through the Samsung Galaxy Store.” 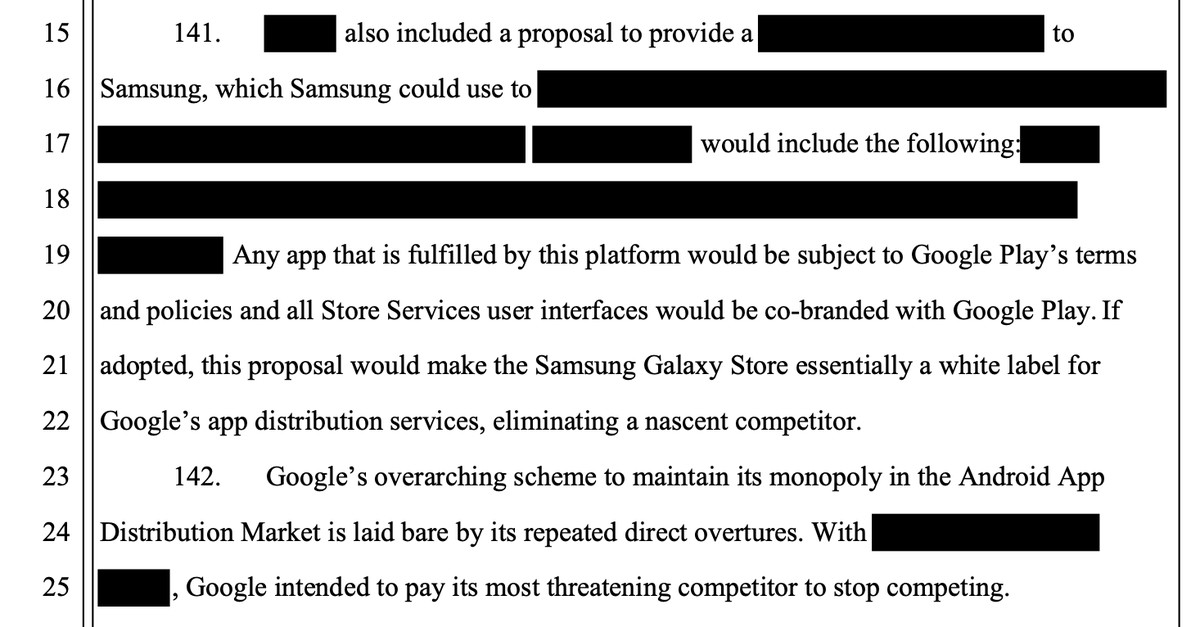 As well as attempting to nullify Samsung’s store directly, the attorneys general claim that Google worked with app developers to encourage them not to distribute their apps outside of the Play Store, effectively paying them off while imposing restrictions about how they distribute their apps. In a heavily redacted section of the filing, the AGs argue that much of Google’s response came “as a direct consequence” of Epic Games choosing to distribute Fortnite outside of the Google Play Store. “To Google, competition in app distribution is a virus to be eliminated,” the suit says.

In a blog post published shortly after the suit was filed, Google’s senior director of public policy Wilson White called it “a meritless lawsuit that ignores Android’s openness.”

“If you don’t find the app you’re looking for in Google Play, you can choose to download the app from a rival app store or directly from a developer’s website. We don’t impose the same restrictions as other mobile operating systems do,” White wrote, adding that manufacturers and carriers have the option of pre-installing other app stores and that “most” Android devices ship with ”two or more app stores.”

Epic Games made similar allegations that Google has attempted to quash rival app distribution methods in its lawsuit against the search giant last year. It claimed Google forced OnePlus to abandon a deal to preload a special Fortnite launcher on its phones, and that it prevented LG from pre-installing the Epic Games app on its devices.