Samsung is releasing a new version of The Wall, its massive modular MicroLED display. Measuring in at over 1,000 inches in size, the new “IWA Series” display is aimed at businesses and commercial applications rather than homes, and Samsung’s promotional images showcase it being used as a huge display in a retail environment. The display is available in “select markets” from today, but Samsung’s press release doesn’t publicly list a price.

Improvements for this year’s display include LEDs that are up to 40 percent smaller than last year, which Samsung says should lead to higher contrast and better color uniformity. The purity of The Wall’s colors has also been improved over the 2020 model, and Samsung boasts that it’s got a new AI processor that further improves picture quality and contrast, and removes noise. Docking connections have an improved, wireless design, and the display’s depth has been cut in half. 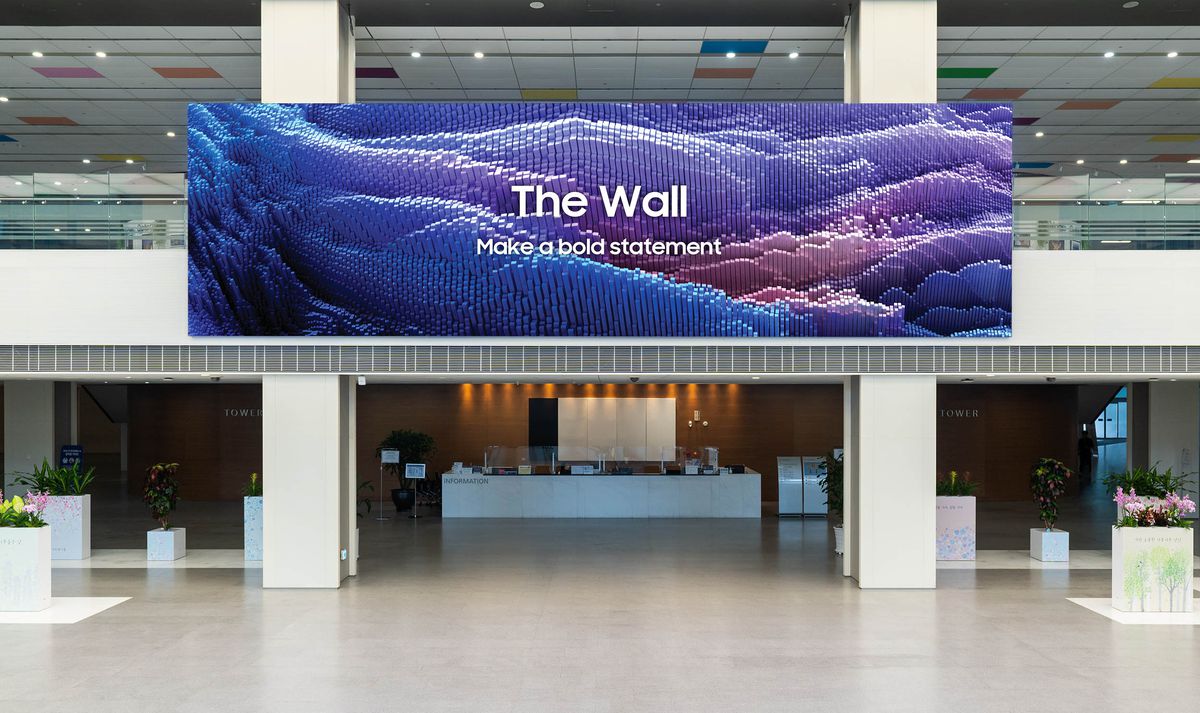 The Wall, now with smaller pixel and a thinner design. Image: Samsung

The display has an 8K resolution with a 120Hz refresh rate, and because it’s made up of modular panels, it can be arranged in a number of different configurations, including an ultrawide 15,360 x 2,160 16K resolution. Samsung says the new 2021 model can be arranged to be concave, convex, or installed in other positions like being hung, mounted to a ceiling, or installed in the shape of an “L.”

The new IWA Series of The Wall is Samsung’s latest display to use its MicroLED technology, which relies an array of self-emissive LEDs to create its image, rather than an LCD layer like most traditional TVs. It means that the panels can create better black levels by turning off pixels entirely, similar to the effect you’ll see from an OLED TV but without OLED’s traditional limitations like the risk of burn-in and lower peak brightness than LCD panels. Samsung says its latest version of The Wall has a peak brightness of 1,600 nits, while the best of LG’s OLEDs still peak at under 1,000.

While The Wall is an attempt to sell massive MicroLED displays to commercial customers, Samsung has also started including the technology in traditionally-sized TVs for the rest of us. At this year’s CES it announced a 110-inch MicroLED TV, and it later expanded this range to include 76 to 99-inch models. These are still massive TVs, to be sure, but at least they should fit on a wall in your house, unlike Samsung’s colossal 1000-inch monster.

Apple stumbled into a war with the gaming industry, and the future of iOS is at stake

High Time for Cyberlaw Enforcement and a Future of Work Strategy