Thrustmaster’s new $399.99 T248 is a force-feedback steering wheel and pedal setup designed for the PS5, PS4, and PC. While it’s not quite as premium as some of the more extreme enthusiast gear out there, it’s intended to be an all-in-one package that gets players started with a good quality racing wheel setup.

I’ve been using it for a while in advance of its release today, and I think Thrustmaster has struck an impressive balance between price and performance. If you can fit it into your setup, it’s a great option for PlayStation and PC. (An Xbox-compatible version will also follow later this year.) 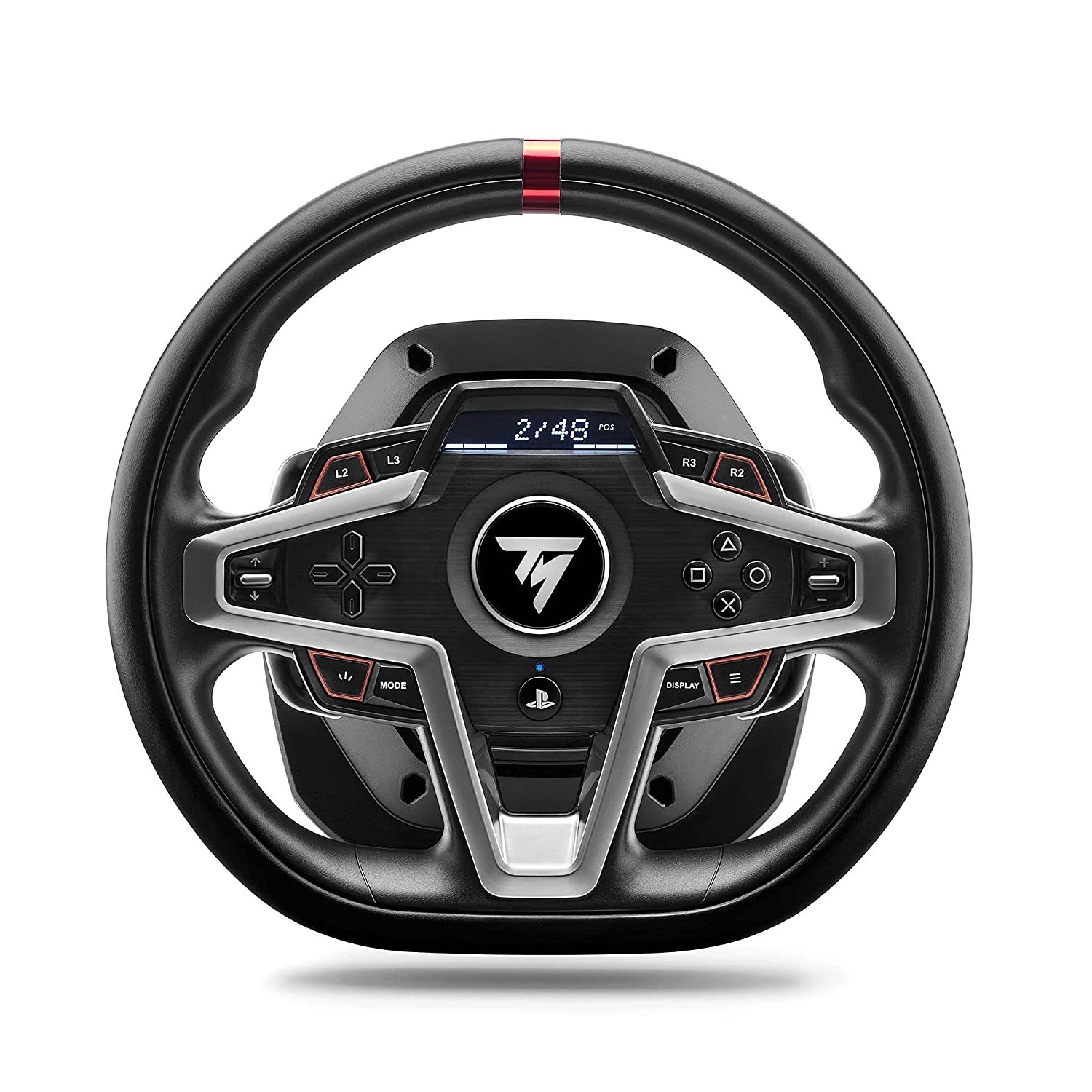 If you’ve never used a force feedback wheel before, it’s hard to overstate how much one can change the experience of playing racing games. A good wheel provides a strong level of resistance and can replicate the effects of the track on your vehicle in granular detail, which heightens both immersion and your understanding of what’s going on.

The most dedicated racing simulator fans use direct-drive wheels, which are essentially full-on car wheels attached directly to bulky motors and usually cost thousands of dollars. Entry-level wheels, meanwhile, rely on more conventional gears and rumble motors. Thrustmaster’s “Hybrid Drive” system sits somewhere between the two, using belts and pulleys to provide force feedback; the company says the T248 is the only wheel in its price range to use a belt in its design like this.

The T248 also stands apart by integrating an LCD screen into the wheel itself. Depending on the game, this can display information like lap info, speed, your position, and more, or device-specific settings such as the type of force feedback and the angle of the wheel. It’s not something I found myself spending a lot of time looking at — it is generally a bad idea to look away from the actual screen when you’re playing a racing game — but it does add a nice touch of authenticity.

The T248 is easy enough to hook up to your PlayStation or PC. It does require an external power supply, but otherwise it’s simply a matter of connecting the pedals to the wheel and then a single USB cable to your gaming machine. (You do need to download a driver on PC.) It has all the buttons you’d expect on a PS5 controller, so you can navigate menus and so on with ease. One thing to watch for is that it’ll calibrate itself by quickly spinning the wheel back and forth when you turn your hardware on, which could be alarming if you’re not expecting it. 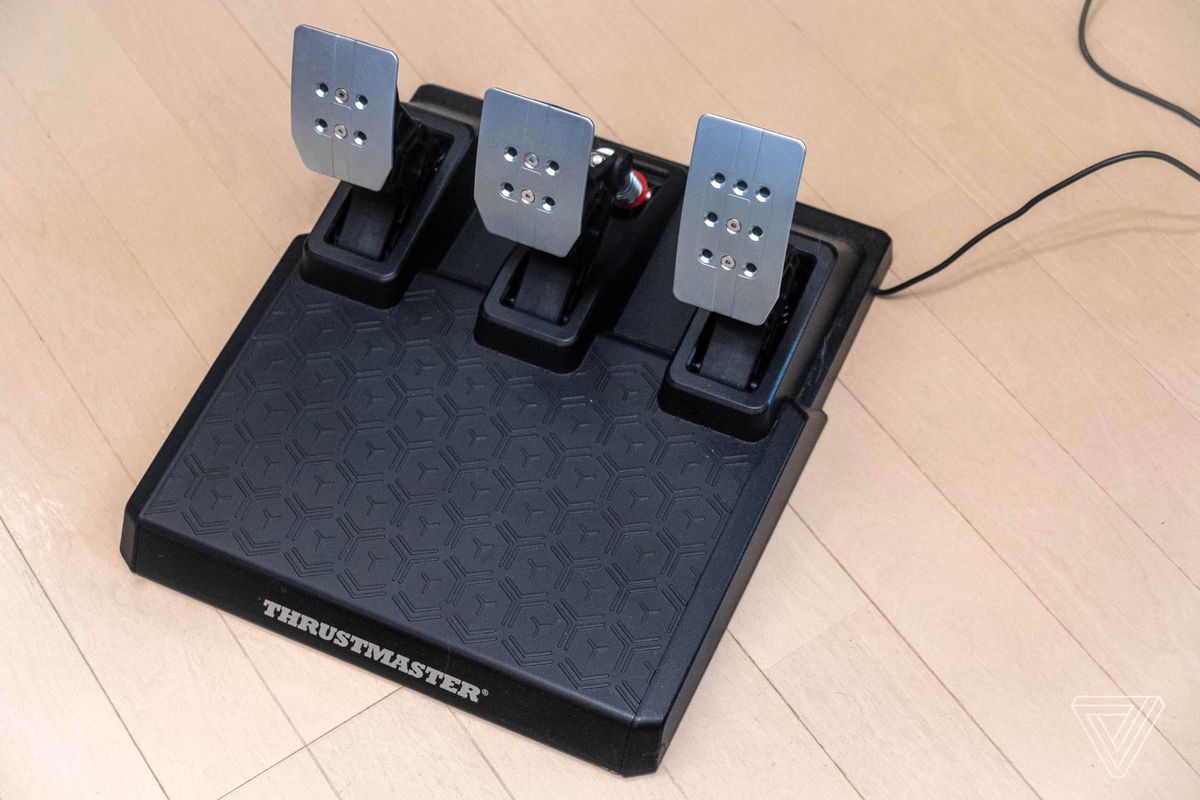 Another thing you might not expect is the potential difficulty of actually getting all the equipment in place. The wheel comes with a clamp system that is relatively easy to attach to a desk or table, but you’re likely to find that your existing furniture isn’t at the ideal height or placement for a comfortable position. In my living room, for example, I have a coffee table pulled close to the sofa, so if I make room for the pedals I have to push the table back and hunch over the wheel to reach it. The setup worked better in my office with my PC as I could just put the pedals under the desk, but that made me wish for wheel locks on my chair because slamming the brakes sometimes ended up pushing me backward across the hard floor.

None of this is news to racing game enthusiasts, of course, which is why they often go for more elaborate setups involving screwing the wheels and pedals into a dedicated cockpit-style frame. These can be relatively accessible and inexpensive, but obviously it’s more of a space commitment than attaching a wheel to an existing desk. As the T248 is a product intended to give first-time users a good out-of-the-box experience, it’s worth noting that you may need to make a few more adjustments yourself than what Thrustmaster is able to include.

Once you’re set up and comfortable, though, the T248 is great. I played it with a wide variety of racing games, from arcade-y titles like Dirt 5 and Forza Horizon 4, to more realistic releases like F1 2020 and Assetto Corsa, and it makes each and every one of them feel like completely different games compared to the experience you get with a regular controller. You have a much better sense of when your car might slip out of control or when you ought to start accelerating out of a corner. Even a comparatively niche game like MudRunner — which involves plowing heavy Soviet vehicles through challenging off-road environments — is transformed into a fight against the machinery and the terrain.

While you’re not going to get the level of feedback of an expensive direct-drive setup, this is far more convincing and realistic than the lower-end wheels I’ve used. It also just feels more premium, with a leathery finish over foam surrounding the wheel itself. There isn’t a gear stick included, but the magnetic shifter paddles behind the wheel are satisfyingly clicky. The pedals also feel very substantial, including one for the clutch as well as the accelerator and brake, and you can adjust their level of resistance by swapping out the springs. 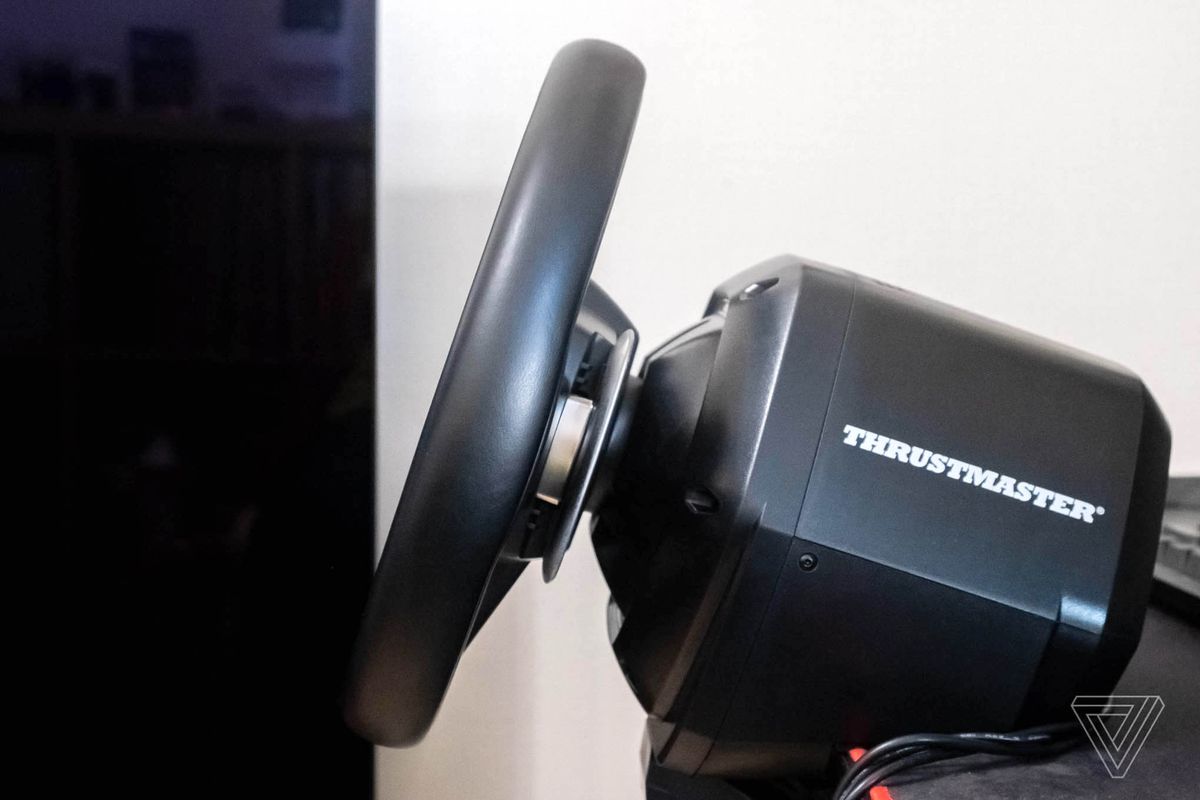 You don’t strictly need a racing wheel to play racing games, just as you don’t need a flight stick for flight simulators or a fighting stick for fighters. But as with those genres, a dedicated controller should be considered essential for budding enthusiasts. If you’re a beginner who’s serious about the idea — or just really hyped for Gran Turismo 7 or Forza Horizon 5 — the T248 is a great way to get started. For a game controller, $399 isn’t exactly impulse-buy territory, but I think you get good value for what this package is.

The one thing to know is that it does require a slight commitment. You’ll either want to be sure it can work in your living environment already or prepare to construct a full-on driving rig in your basement. The T248 has spent most of its time attached to the desk in my office, and it’s been a blast. But if I had the space for a frame, well, that would be a whole new rabbit hole.

Call of Duty Vanguard Alpha ‘Slipstream’ Surfaces on PSN and Battle.net; Weighs in at 35GB on PS5 and 28GB on PS4