A Facebook fan page for Elon Musk with 153,000 followers had been verified as the official page representing the Tesla Technoking — in violation of Facebook’s own rules — but sometime after we first published this story on Monday, the page became inaccessible. It’s unclear if Facebook took it down or the owners chose to make it unavailable.

To be clear, the page wasn’t pretending it’s Musk; it openly stated that it was a fan page in its About section (emphasis ours):

Musk owns a Tesla Roadster car 0001 (the first one off the production line) from Tesla Motors, a company in which he is an early investor. The Roadster is a battery electric sportscar with a 220 mile range.

This is a fanpage, uploading tweets etc from him

Here is the page’s description, which states it’s a fan page.

When we wrote about it, there were only 10 posts on the page, with the earliest dating from October 21st. One was a photo of Musk, one was a notification that the page updated its profile picture to be one featuring Musk, and the others appeared to be reposts of recent tweets.

The page didn’t start as a fan page for Elon Musk. The Page Transparency tab — which shows some history of a page, who it is managed by, and whether it runs ads — said the page was created on July 28th, 2019 to represent a “Kizito Gavin,” which is the reversed name of soccer player Gavin Kizito.

The page changed its name six times, all in 2021, most recently changing to Elon Musk twice (somehow) on October 17th. The Page Transparency section also said that the people who managed the page were based in Egypt. Musk lives in Texas. 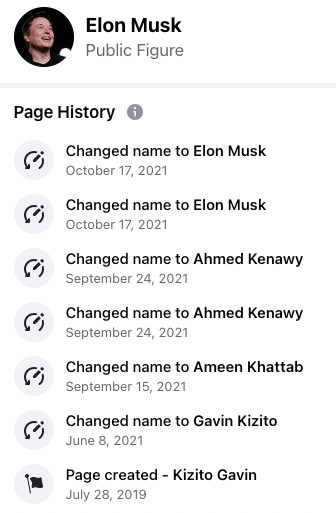 The page started as one for Kizito Gavin, but now apparently is the official one for Elon Musk.

Also maybe worth noting: the URL for the page cut off the end of the word “official” — https://www.facebook.com/ElonMuskoffici — which doesn’t seem very official.

It’s unclear when the page was verified. Facebook’s verification rules state that the company has “confirmed that the Page or profile is the authentic presence of the public figure or brand it represents.” To be verified on Facebook, you have to fill out a form that requires, among other things, that the submitter share official identification in the form of a driver’s license, passport, national identification card, tax filing, recent utility bill, or articles of incorporation.

Verification is a challenge for big social media platforms. Twitter has also struggled with the problem. It paused its verification program in 2017 and relaunched it earlier this year. The relaunch has been somewhat bumpy, though, and the company admitted in July that it mistakenly verified a small number of fake accounts.

Samsung leaks new notched tablet on its own website

Some Smart Home Devices Headed to the ‘Brick’ Yard