On Friday, PC gaming giant Valve invited the developer community to learn more about its Steam Deck, a $400 handheld gaming PC with a comparatively powerful AMD chip. It’s akin to the Nintendo Switch of gaming PCs, and there’s a lot we already knew about the delayed handheld from its announcement, our trip to Valve’s headquarters, and an official teardown. But today, we learned even more.

Here are the highlights — unless, of course, you’d like to watch Valve’s entire livestream or breakout sessions for yourself. That’s fine too! 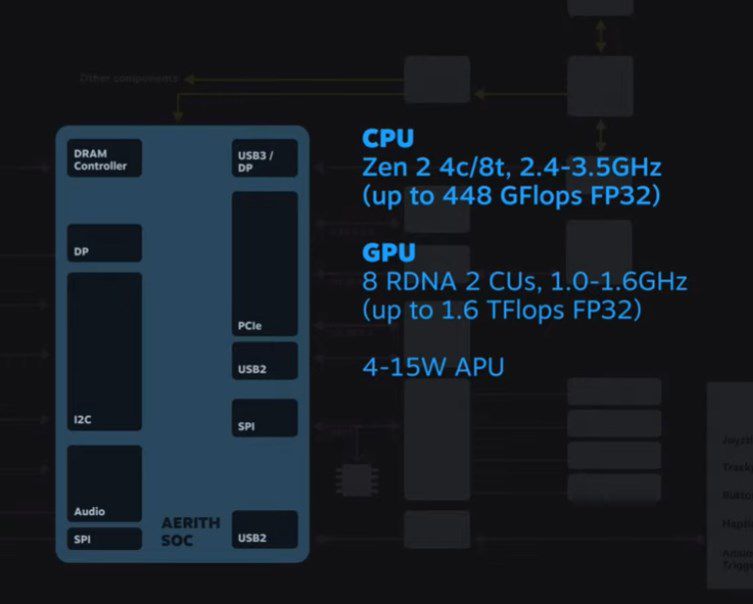 The AMD chip inside the Steam Deck has a name: it’s the Aerith SOC, a clear reference to the famous Aerith from Final Fantasy VII. It’s an APU with a power envelope of between 4 and 15 watts, and it contains both an 4-core, 8-thread AMD Zen 2 CPU that runs between 2.4-3.5GHz, and 8 AMD RDNA 2 compute units worth of graphics clocked between 1 and 1.6GHz, for a total of 1.6 teraflops of raw graphical compute.

Here’s the Steam Deck’s entire block diagram, so you can see how the whole system comes together around that chip: 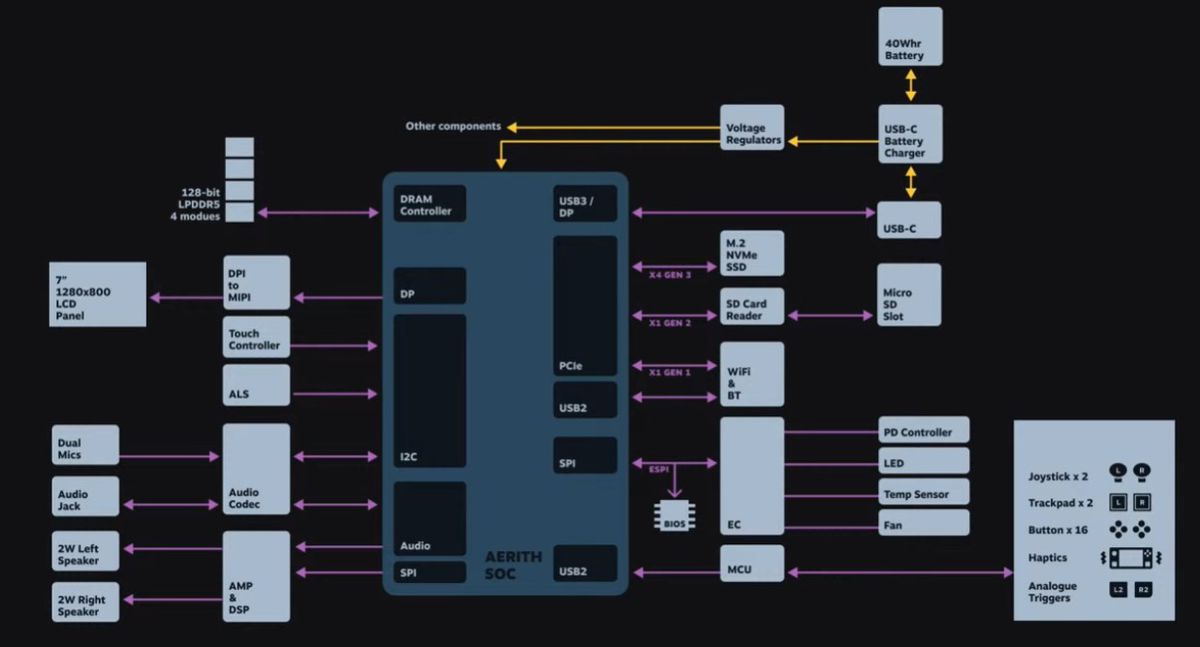 It interfaces with 16GB of unified LPDDR5 memory, with a total of 88GB/s of bandwidth. While there’s only 1GB of dedicated video memory, Valve says the GPU can access up to 8GB of that shared memory as needed.

“If you’re in Florida in July, you may run out of thermal headroom”

Valve says the chip’s designed to run continually and consistently at its quoted clockspeeds: “The performance your game gets in the first ten seconds is likely to be the same performance you get two hours from now, or even indefinitely if you’re plugged into the wall,” says Valve’s Yazan Aldehayyat, adding that the system’s designed to perform the same docked, undocked, charging or not, even while downloading games or at an elevated temperature. “If you’re in Florida in July, you may run out of thermal headroom,” he says, but even then Valve says it’ll try to throttle downloads and transfer speeds before it throttles your game performance.

Valve does warn that developers may need to avoid pushing the GPU too hard if they want longer battery life. “We didn’t place any artificial limits on how much power the APU can consume.” As one specific tactic, Valve’s suggesting that games cap their framerate to save battery. That could make a big difference: “You can play Portal 2 for four hours on this thing. If you limit it to 30 FPS, you’re going to be playing for 5-6 hours,” Valve told IGN in August.

Another optimization: Valve revealed today that developers can upload versions of their games with lower-fidelity texture packages to Steam’s Depot to improve performance and reduce the amount of storage and time it takes a user to download a game. That’s similar to Microsoft’s Smart Delivery system for the Xbox One, Xbox One X and Xbox Series X/S, which routes the proper version of a game to each console. (But where Xbox developers are likely targeting 1080p, 1440p and near-4K respectively, the portable Steam Deck runs at 720p and 800p resolution.)

Designed to dock and stream 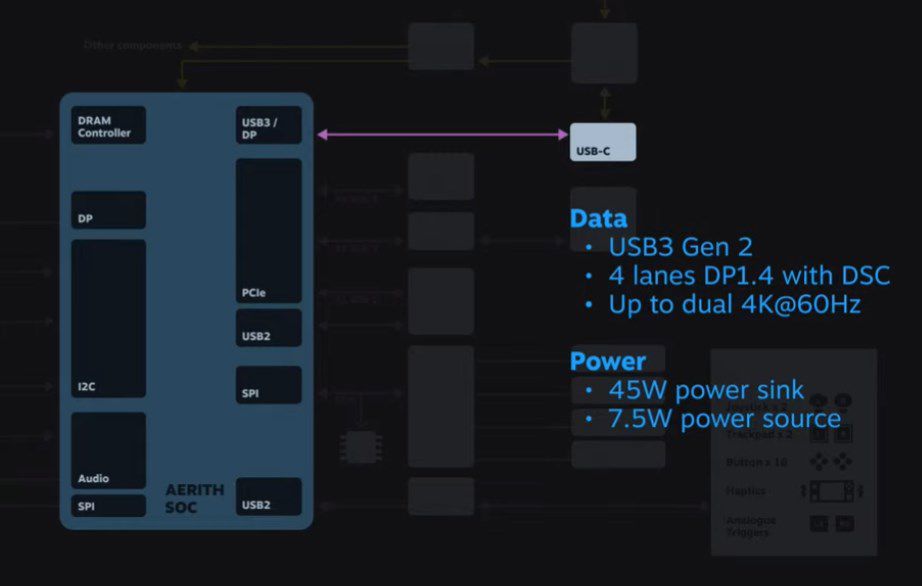 With a 45-watt power supply, Valve says the Steam Deck can charge and play at the same time, and power a 7.5-watt worth of external peripheral. The USB-C port also offers external display support for up to two 4K monitors at 60Hz (using Display Stream Compression), and Valve says it’ll offer USB 3 Gen 2 “if you opt for half the display bandwidth.” The optional dock (which has yet to be pictured or go on preorder) will also offer Gigabit Ethernet.

And if you opt to play on a TV or monitor, you’ll probably be happy to hear the first full confirmation that Valve is supporting AMD’s FidelityFX Super Resolution (FSR) upscaling with the Steam Deck. In fact, AMD representatives on the stream confirmed that not only does the Steam Deck work with FSR in games that support it — potentially making them look a bit better on the big screen — but that the Steam Deck will natively support FSR at an operating system level with a future update. AMD says it’s working on drivers that will enable the recently announced Vulkan Dynamic Rendering, too.

There’s no USB 4 or Intel-proprietary Thunderbolt here, obviously, and you’re only getting 802.11ac (Wi-Fi 5) instead of Wi-Fi 6 or 6E, but Valve says the Deck is optimized for “reliability and robustness even in congested environments.” That way, Valve can offer a “first-class Remote Play experience” to beam games from their desktop PC to the Deck inside their own homes, while using less battery than games natively running on the Deck’s hardware itself.

Valve did an great job with Wi-Fi engineering when it built the Steam Link HDMI puck, so I’m excited to test that.

Scant slowdown over SD (and eMMC)

The entry level $400 Steam Deck only comes with 64GB of comparatively slow eMMC storage and a microSD card slot for expansion — you’ll have to pay notably more for the faster models with NVMe SSDs, and even then they’ll be fairly easy to fill with a decent-sized Steam library of games.

But today, Valve assured developers that eMMC and SD aren’t that much slower: roughly 12 percent and 18 percent slower respectively when it comes to loading games. (Yes, the Y-axes are either mislabeled or don’t line up with the bar graphs.)

Boot times are 25 percent slower, but I suppose we’ll have to see how long they are in reality — Valve didn’t specify an actual number of minutes or seconds it takes for the Steam Deck to boot.

But Valve is also thinking of the Steam Deck as an always-on device, one where you won’t always need to boot and launch games from scratch: there’s a suspend and resume feature built into the Steam Deck that should let you quickly pause games like you do on a Nintendo Switch. 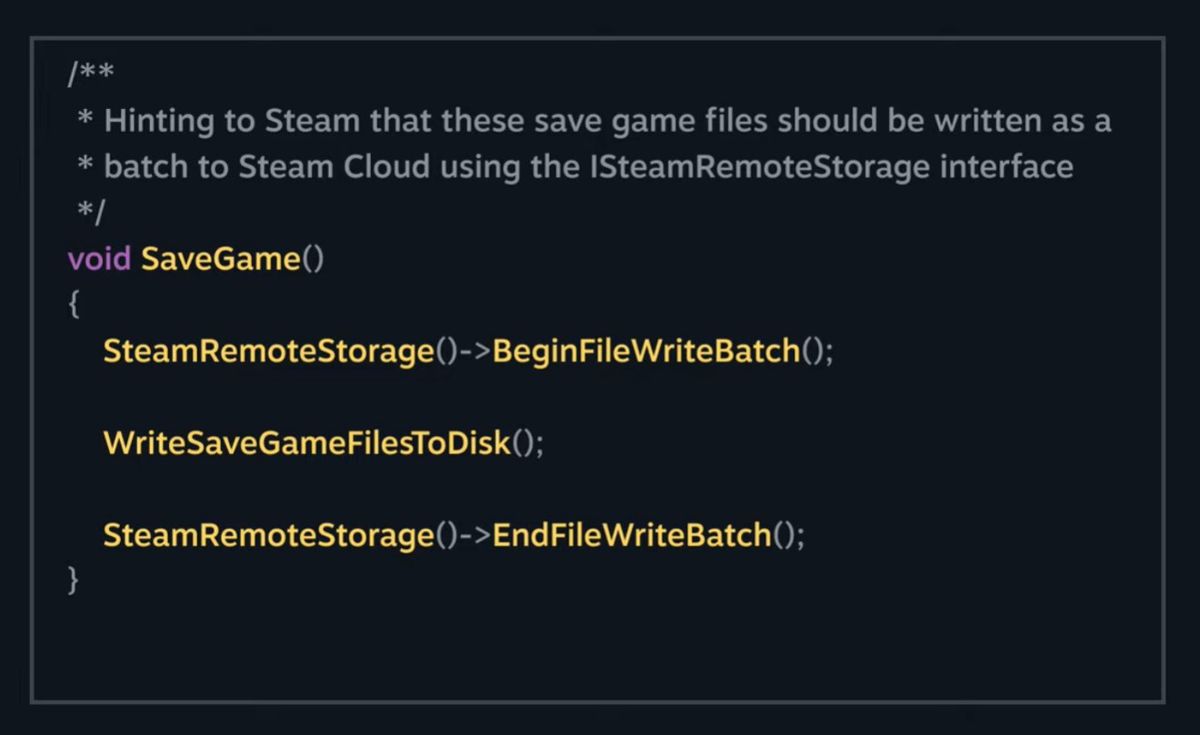 Valve’s changing how Steam’s cloud save system works as a result: Where today’s Steam generally syncs your cloud saves after you’ve quit out of a game, the company’s offering new cloud APIs so developers can get their games to sync in the background at the time you suspend the title.

Theoretically, that could also mean you could pause a game you’re playing on the Steam Deck and quickly pick it up on your desktop PC, or vice versa.

There’s a white Steam Deck right out of Portal, but you can’t have it

It’s not for sale. GIF by Sean Hollister / The Verge

During the entire Steam Deck presentation, the backgrounds were filled with intriguing hints at Valve’s prototyping process, and many onlookers noticed a white Steam Deck among them — one straight out of Valve’s hit game Portal right down to the Aperture logo around back. 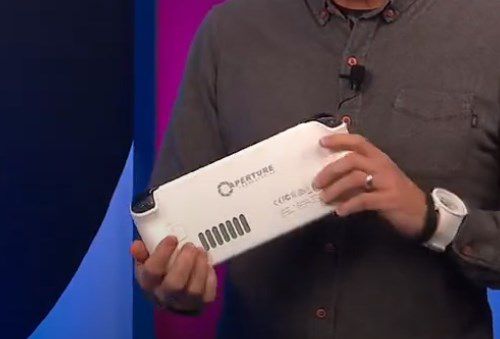 Unfortunately, it’s not for sale: “This is a prototype only. We love it too, but we’re not able to bring it to market at the same time we’re shipping the Steam Deck,” said Valve’s Greg Coomer, adding that the company intends to “look at other color options in the future, but that’s really down the road.”

Here are some other random things we learned:

In fact, we’ll leave you with whole bunch of Steam Deck user interface screenshots — we haven’t seen much of this before now. 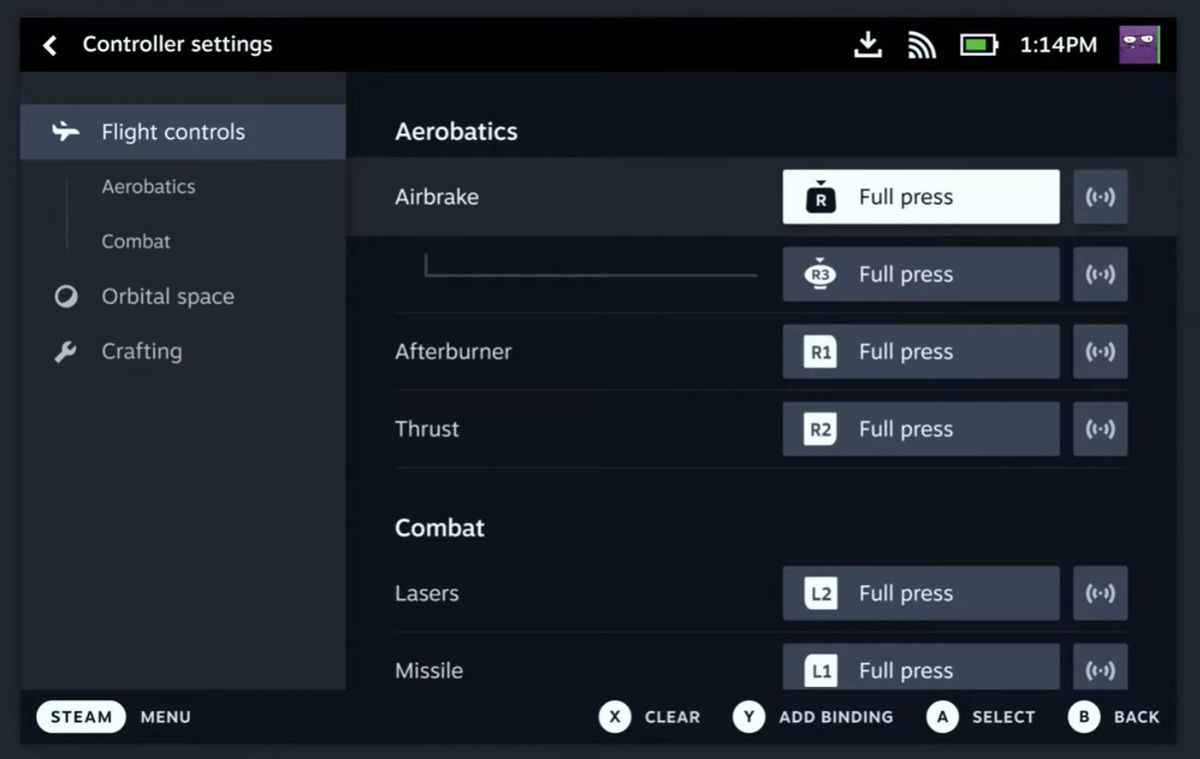 The controller configurator lets you map and bind the Steam Deck’s considerable array of controls. 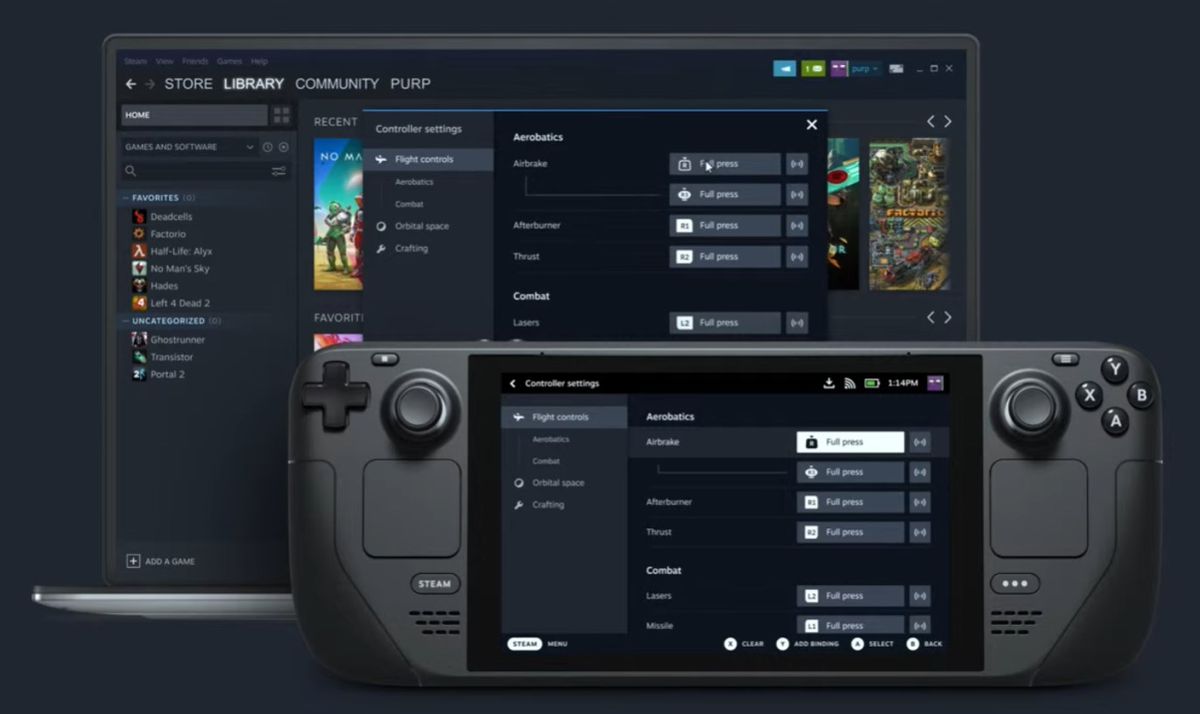 It’ll look the same across Steam desktop and Deck. 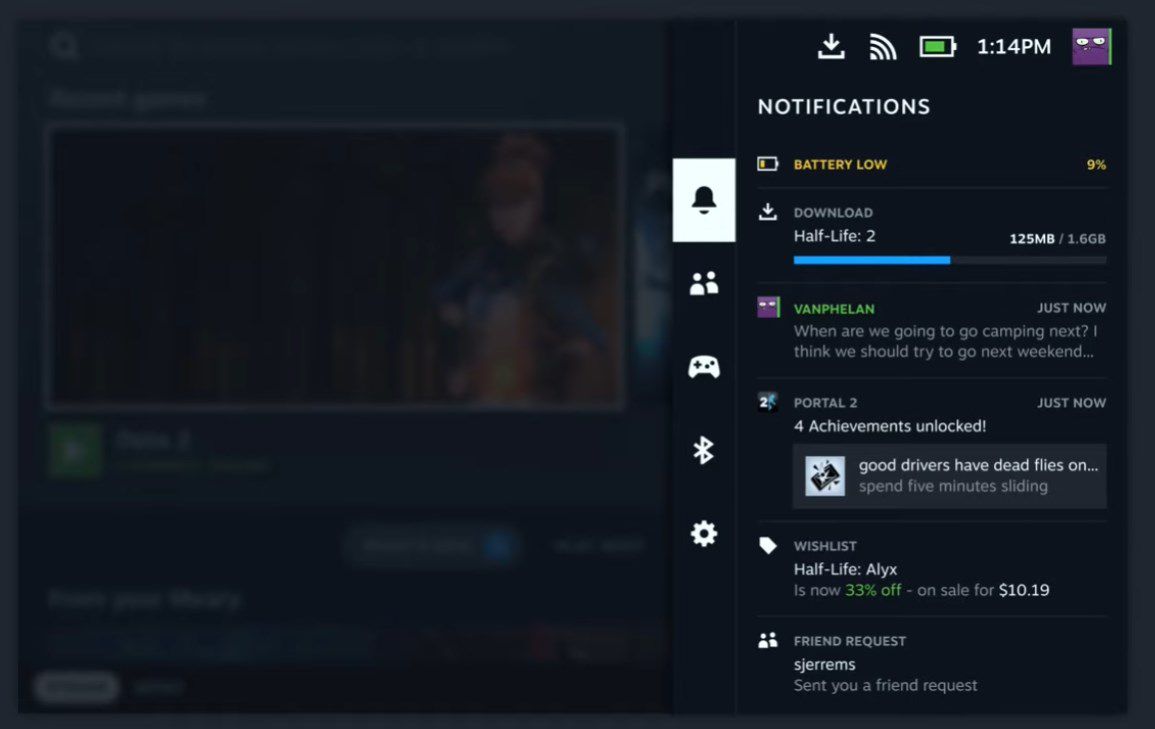 Notifications will have a dedicated button on Deck. 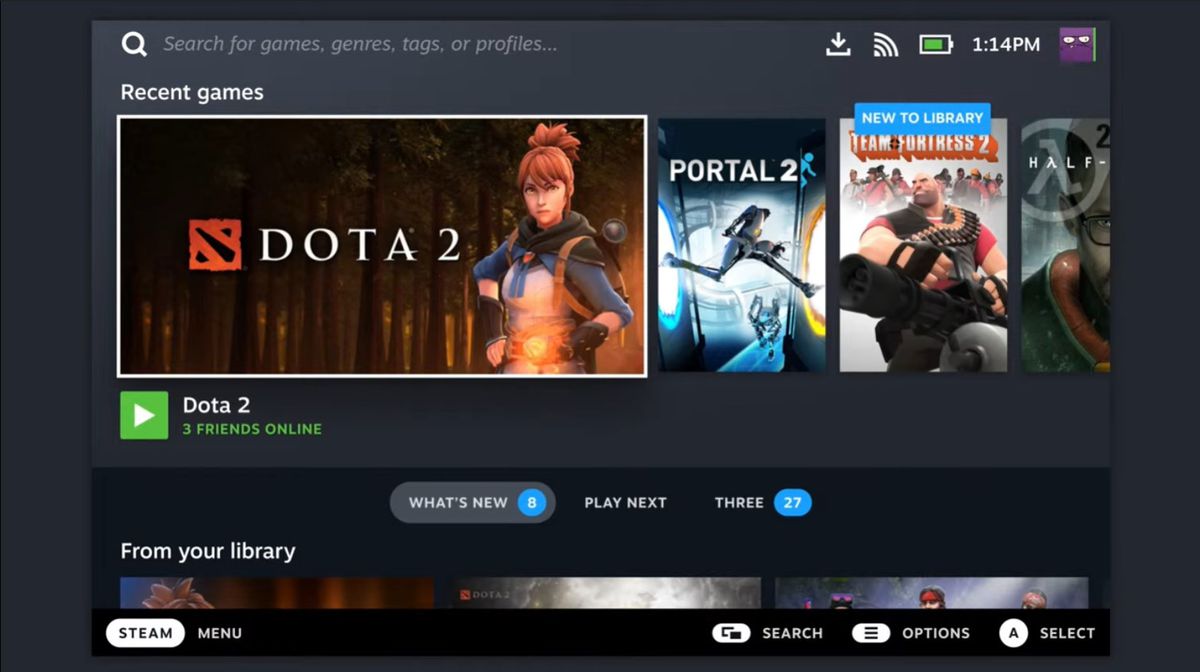 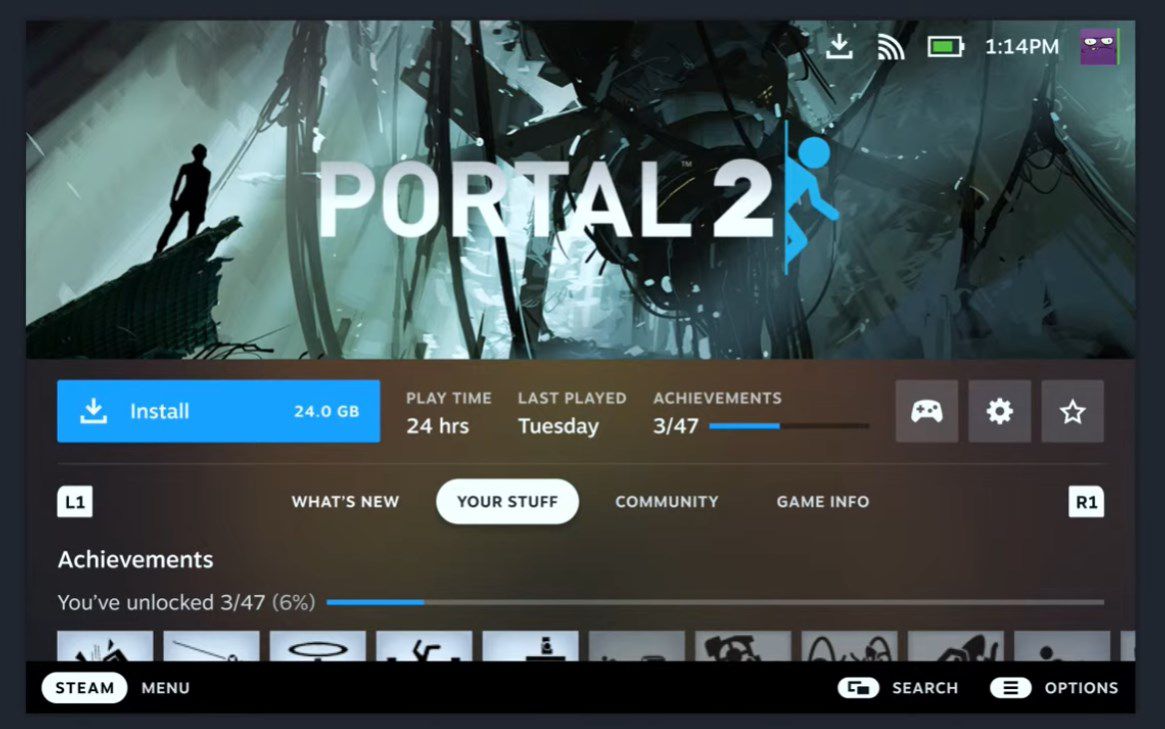 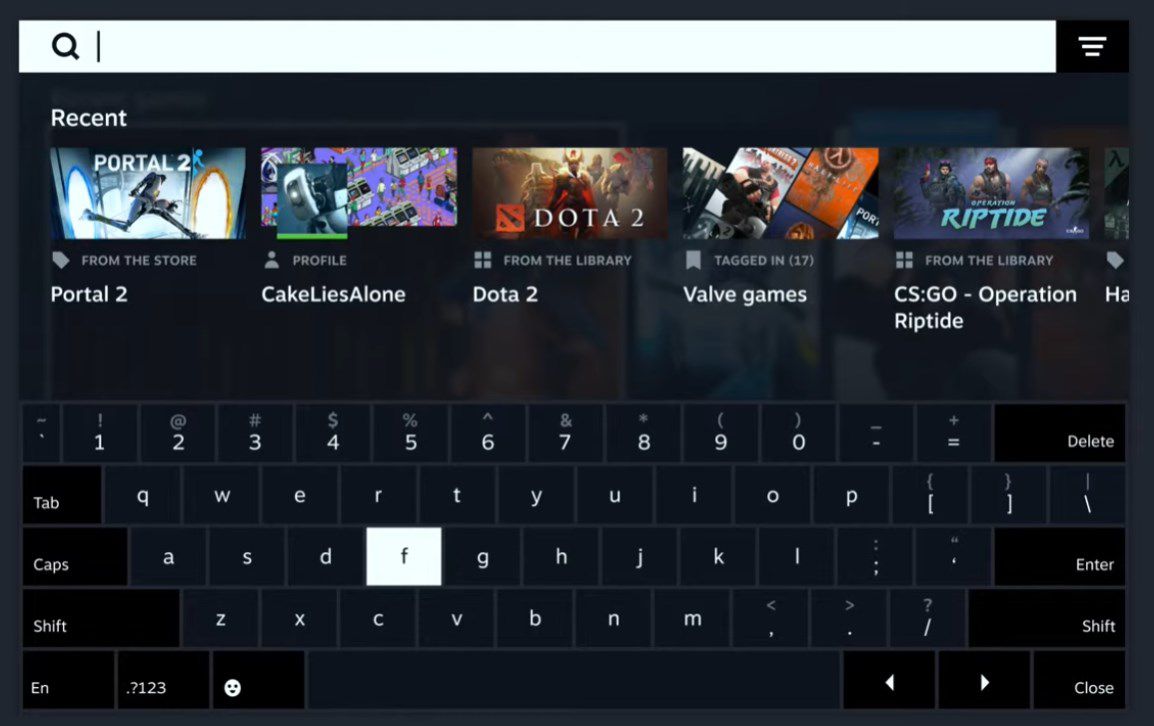 Universal search works across all of Steam, not just games.

Microsoft allows employees to work from home amid coronavirus outbreak

Another US internet backbone provider is shutting down services in Russia