Samsung has managed to single-handedly define the category of “lifestyle TVs” — high-design TV sets that blend into the home more seamlessly than traditional TVs — with The Frame. I’ve got several friends, coworkers, and family members who have recently purchased some model in The Frame lineup. For them, the device’s stylish look, customizable bezels, and ability to showcase artwork or personal photos when the TV is “off” are more important than the latest picture quality or HDMI specs.

For 2022, the company is hoping to take The Frame to the next level and make its wall art parlor trick more convincing than ever before. Samsung says the latest models will have a matte, anti-reflective display with a “lifelike” texture that feels like canvas or paper to the touch.

The anti-reflective display could be a huge draw for consumers; The Frame is able to match the white balance and brightness of artwork based on ambient lighting in a room, but if there’s one thing that gives away the fact that you’re still looking at a TV, it’s screen glare.

By introducing a new anti-reflective film and other anti-glare measures, Samsung hopes that oil pantings and other art will pop off the screen to a more impressive extent than before. Unfortunately I haven’t had a chance to see the new anti-reflective displays in person just yet to see how convincing the end result is — or whether there’s any negative effect on the picture when watching regular content.

The company’s art store offers over 1,600 pieces, and Frame owners can expect a new, more refined user experience in 2022 when browsing that selection.

For 2022, The Frame will be offered in a total of seven different sizes, starting at 32 inches at the small end and topping out with an 85-inch model. As for the tech specs of the TV itself, they sound similar to last year: The Frame will give you a nice 4K HDR picture with an expanded quantum dot color palette, but it lacks high-end TV features like full-array local dimming, 120Hz support, variable refresh rate, and so on. And Samsung continues to ignore Dolby Vision completely. 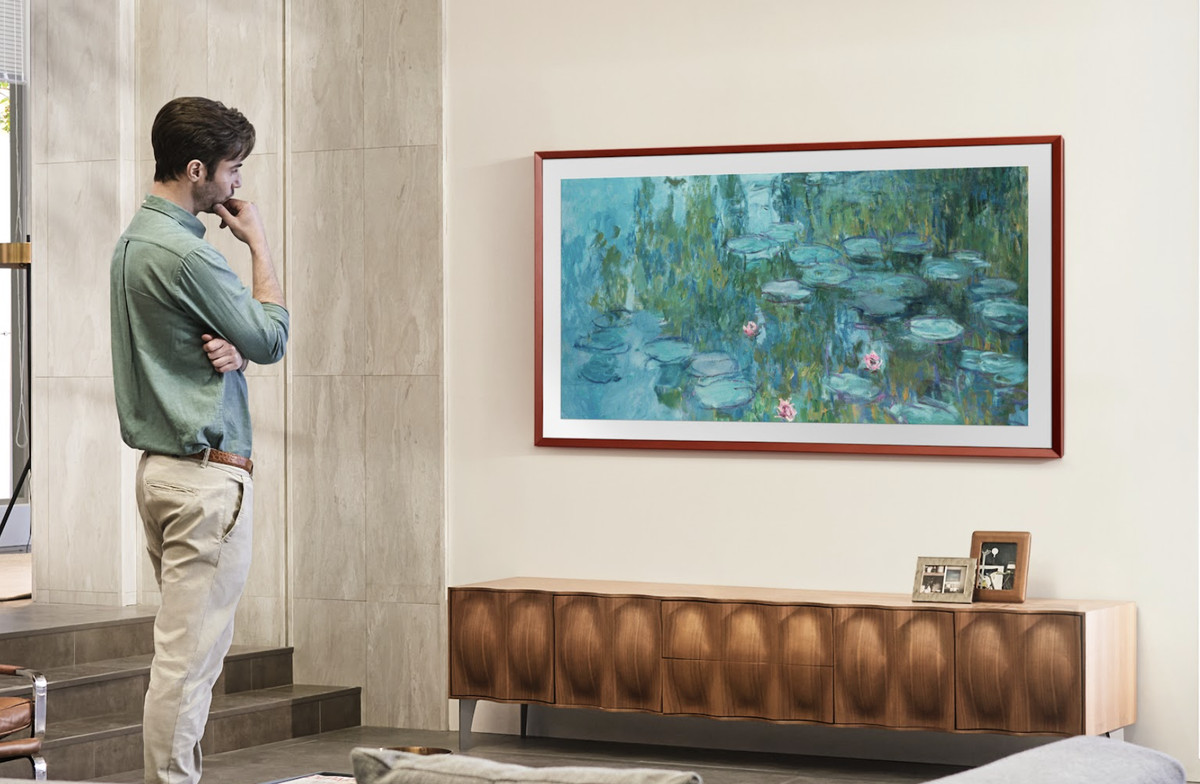 Based on Samsung’s claims, this guy wouldn’t be seeing much glare on the new Frame. Image: Samsung

If image quality is your main priority, the company’s top-tier Neo QLED sets (with Mini LED tech) are still the way to go. But that’s not what The Frame is for. This model — and Samsung’s other lifestyle models like The Serif — are for people who want a perfectly acceptable picture in a package that complements their home decor instead of clashing with it.

Pricing, release info, and more detailed tech specs for the 2022 Frame lineup should be announced closer to when the TVs begin shipping in the coming months.

Facebook tests merging its News Feed and Stories into a single...