Tesla now lets customers buy select items of merchandise using Dogecoin, the company’s CEO Elon Musk has announced. Products buyable with the meme-based cryptocurrency include the Cyberquad for Kids (12,020 doge / around $2,320), the Giga Texas Belt Buckle (835 doge / around $161) and the Cyberwhistle (300 doge / around $58). Business Insider notes that Dogecoin was up 16 percent to around $0.20 following the news.

The initiative was initially announced by Musk on Twitter on December 14th when he said that the company would “see how it goes” with the cryptocurrency payment option. It’s unclear if or when Tesla might eventually accept payment for its vehicles in Dogecoin, which Musk has previously said may be his favorite cryptocurrency.

The initiative appears to be supported outside the US, with the S3XY Mug buyable with Dogecoin from the UK Tesla store for 150 doge (around $29). As of this writing, Dogecoin now appears to be the only way to buy certain items, as their regular payment icons have disappeared.

Support for Dogecoin purchases comes just months after Tesla started accepting Bitcoin for car purchases, only to cease the practice 49 days later, citing concerns about the use of fossil fuels for Bitcoin mining. “Cryptocurrency is a good idea on many levels and we believe it has a promising future, but this cannot come at great cost to the environment,” Elon Musk said in a statement. 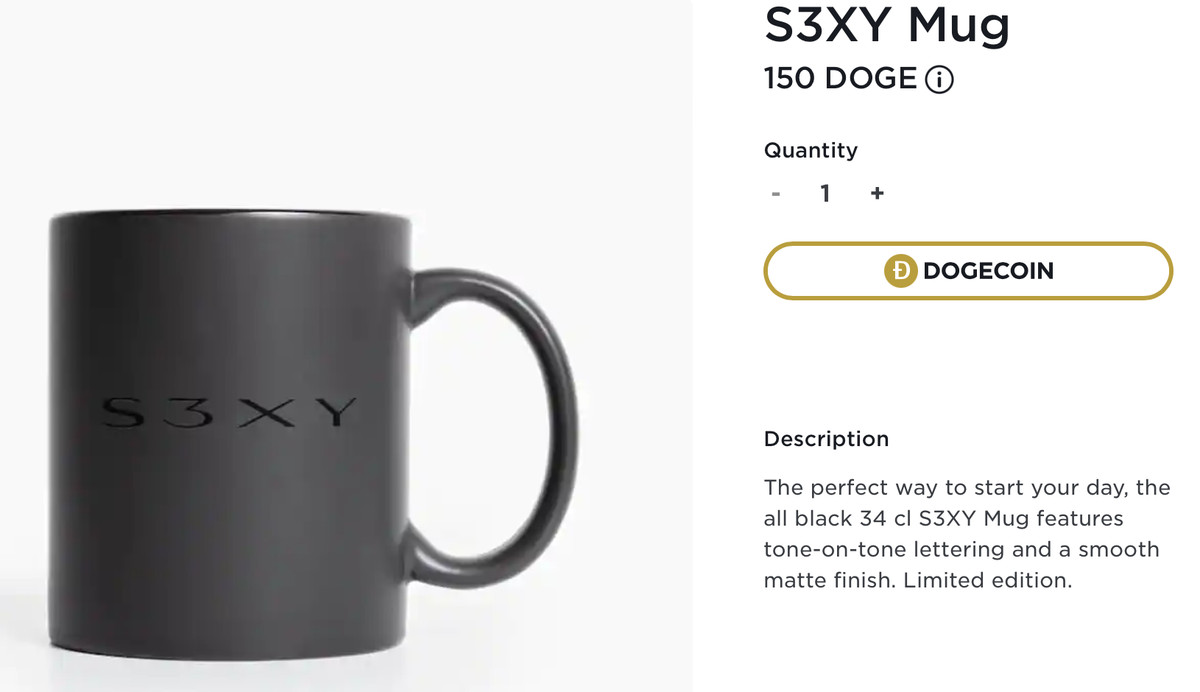 Dogecoin currently doesn’t consume anywhere near the same amount of energy per transaction as Bitcoin, according to research from TRG Datacenters. But Dogecoin is still an energy-intensive proof-of-work cryptocurrency, as digital currency economist Alex de Vries explained in May. Its smaller energy use per transaction is largely because it’s currently a less valuable asset than Bitcoin.

For his part, Musk said in May that he was working with Dogecoin developers to “improve system transaction efficiency.” He’s not been shy about his support of the cryptocurrency, which started life as a joke based on the Doge meme. “Lots of people I talked to on the production lines at Tesla or building rockets at SpaceX own Doge,” Musk told CNBC in October. “They aren’t financial experts or Silicon Valley technologists. That’s why I decided to support Doge, it felt like the people’s crypto.”

Another of Elon Musk’s ventures, SpaceX, started accepting payment in Dogecoin in May and next year plans to send a satellite named DOGE-1 to the Moon.

Final Cut Pro X for iPad May Arrive During ‘Summer 2021’; Other ‘Pro’ Apps Rumored to Arrive Too

Amazon will give you a whole $10 for your palm print