Some workers delivering packages for Amazon were more than twice as likely to be injured on the job compared to non-Amazon delivery workers, according to a report from the Strategic Organizing Center (SOC) advocacy group (via CNBC). The union coalition compiled data submitted to the Occupational Safety and Health Administration (OSHA) by Amazon and its contractors and discovered that an estimated 18.3 percent of Amazon’s subcontracted delivery workers were injured seriously enough to be reported.

As the report notes, Amazon deliveries aren’t made entirely by workers that the company directly employs. The SOC says that a large portion of packages are delivered by people working for a Delivery Service Partner (DSP), or a company that contracts with Amazon to make deliveries in a certain area. Amazon also has workers that it directly contracts through its Flex system (where gig workers sign up to deliver packages) and has direct employees that work at its delivery stations and sortation centers. 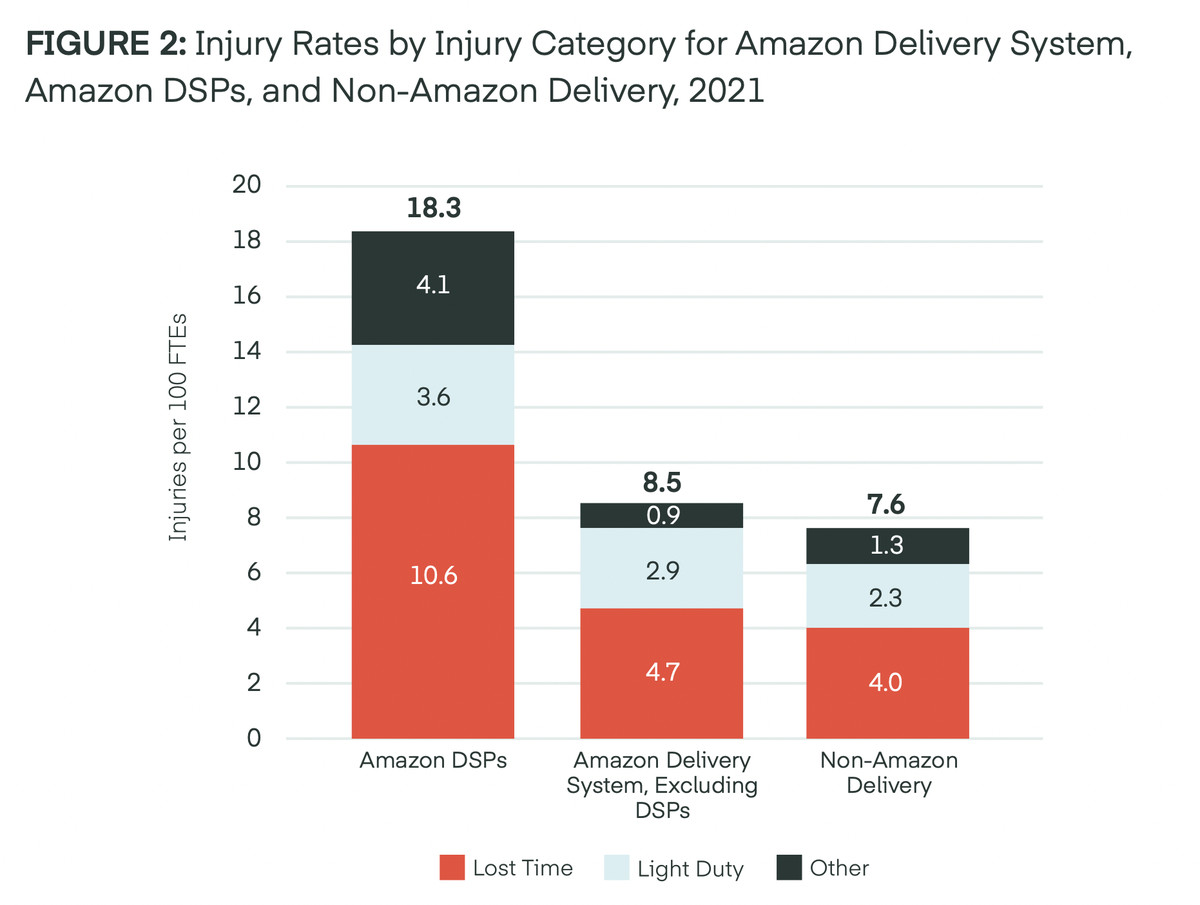 A graph showing DSP injury rates versus the rest of Amazon’s delivery system and the non-Amazon delivery industry. Graph: SOC

According to the report, workers for DSPs are injured at significantly higher rates than Amazon’s own workers, who themselves get injured more than delivery workers for non-Amazon companies. The SOC says that, in 2021, 10.6 out of every 100 DSP workers were injured badly enough that they had to take time off work. And 3.6 out of every 100 DSP workers had injuries that required they be put on light duty. Those injuries can be caused by things like trips, falls, dog bites, strains from repetitive twisting, and car accidents, according to the report, which cites data from a Colorado workers’ compensation insurer.

For the same year, Amazon delivery system workers outside of the DSP program had significantly lower injury rates: 4.7 out of 100 workers for time off and 2.9 out of 100 workers for reduced work. Non-DSP workers also had a rate of 0.9 for “other” injuries — DSP workers had 4.1. Delivery workers not affiliated with Amazon had even lower rates: 4 out of every 100 lost time, 2.3 had to take light duty, and 1.3 had injuries classified as “other.”

The report is based on OSHA reports submitted by Amazon and “roughly 10 percent of” Amazon’s US-based DSPs. Amazon did not respond to The Verge’s request for comment on the report.

The SOC claims that there’s one main reason DSP workers are injured at such high rates: the grueling speed they’re expected to work at. The report cites complaints from DSP drivers and lawsuits from the DSP companies themselves that say Amazon expects them to deliver a package every one to two minutes for 10 hours during the busiest times of the year. Workers also told the SOC that they’re afraid of being fired if they miss their unrealistic quotas. Amazon also reportedly doesn’t make accommodations for local conditions, such as narrow streets that are difficult to navigate its vans through or difficult terrain.

There have been similar stories about the company’s unrealistic goals for its warehouse workers.

While DSP drivers aren’t directly employees of Amazon, companies should be held at least somewhat responsible for the actions of other companies they’ve chosen to work with. That’s especially true in Amazon’s case — the retailer has shown that it’s willing to make rules about drivers’ hygiene and social media posts, and it monitors them with AI-powered cameras and buggy, frustrating apps. It also sets the quotas that DSPs have to meet. It’s hard to imagine that Amazon couldn’t find a way to make sure contracted drivers were as safe as the ones it directly employs (though, arguably, it should be aiming for even better). 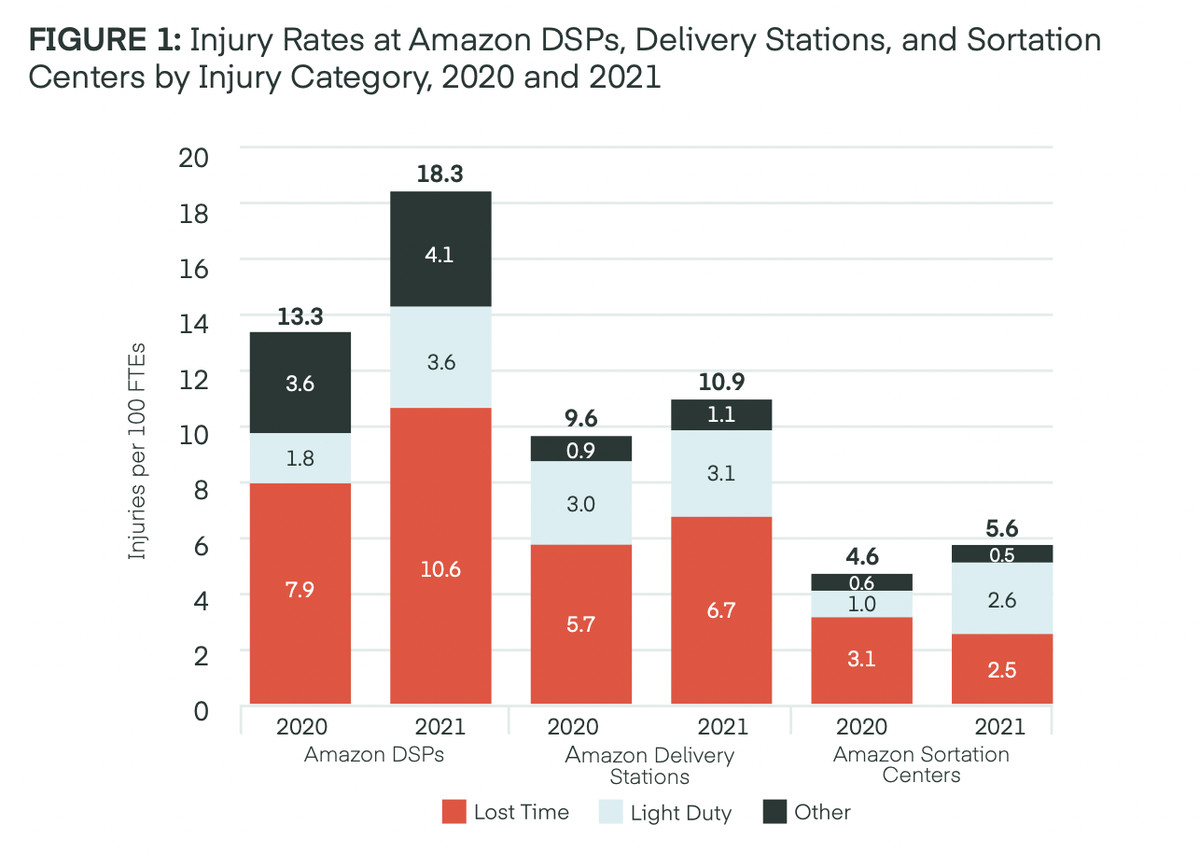 The report claims that the injury rates for Amazon’s delivery workers has increased since 2020 as the company’s business boomed. Graph: SOC

Amazon leadership has addressed injuries before. In his 2021 letter to shareholders, CEO Andy Jassy said that the company’s recordable incident rates were “a little lower than the average of our courier and delivery peers.” The SOC has pushed back against that statement in its report, calling it “seriously misleading.” The union claims that Amazon was using old numbers from 2020, when injury rates were significantly lower. (The injury rates at Amazon’s warehouses also reportedly dipped in 2020 before rising again in 2021.)

The SOC also says that the numbers Amazon provides to back up its “little lower than the average” claim don’t include a large chunk of its delivery operations because it doesn’t take into account the injury data from DSPs. This shouldn’t necessarily be surprising given that Amazon doesn’t consider them employees. (It “empowers” them but doesn’t employ them.) Yet, DSP drivers wear an Amazon uniform, drive a van with the company’s logo on it, and are even given driving directions by an Amazon device.

Apple Could Stop Bundling USB Cables With Future iPhone Models, According to Survey

5.4-inch iPhone 12 Model Size Based on Leaks Compared Against Original iPhone SE and...